As a WordPress developer it’s nice to be able to try out different development setups. Most devs rarely get the time to play around with a new IDE or text editor because they are so busy with work. Getting the chance to sit down with CodeLobster was great.

Just a brief intro this review refers to the Mac version, I usually use VSCode for my development projects.

The CodeLobster IDE was downloaded from here http://www.codelobster.com/download.html

Upon install I was presented with a 30 day trial of the pro version but this falls back to a free version if you do not wish to upgrade. I opened up a local WordPress site – it took about a minute for all the files to parse and it instantly picked up php errors no need to install an add on, which was great.

I then wanted to change the colour scheme the white wasn’t blowing me away. I wasn’t able to find how to change the whole window colour which is a shame but I was able to change the editor text background so I went with brackets dark. 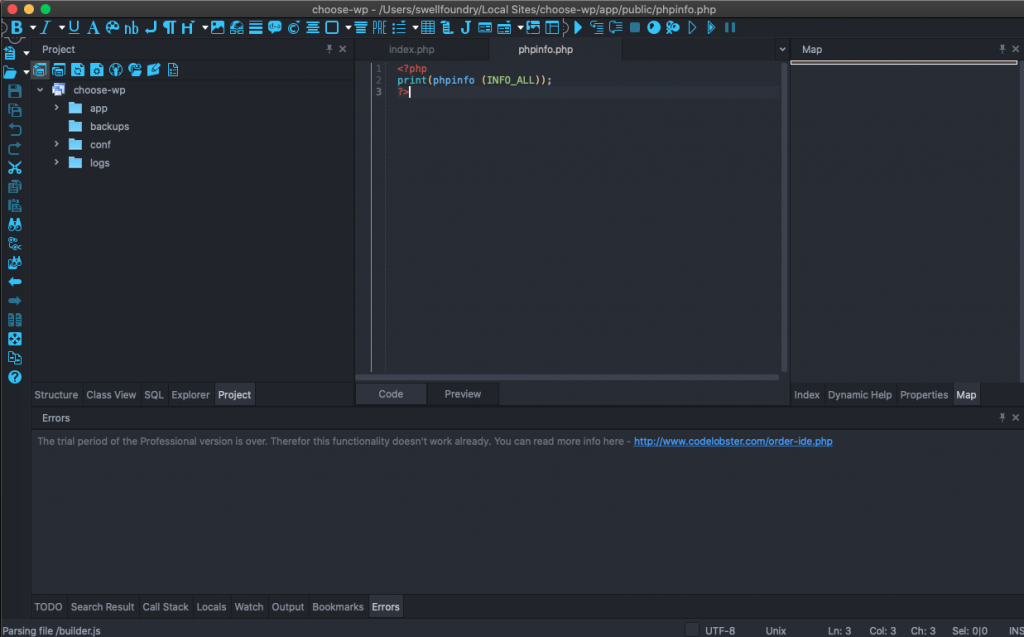 The detachable elements of the IDE whilst giving more flexibility got a bit confusing but I could see the benefit for a developer that really wants the exact layout they want, it offered more flexibility than VScode for example.

I wanted to try and do some debugging so fired up a local project and enabled the XDebug cookie via the XDebug helper https://chrome.google.com/webstore/detail/xdebug-helper/

I set a breakpoint in the wp-config file to see if by some miracle it would work out of the box. I found that by changing the project home url in settings I was able to get the breakpoints to be picked up via XDebug, it did take a bit of tweaking but worked in the end. 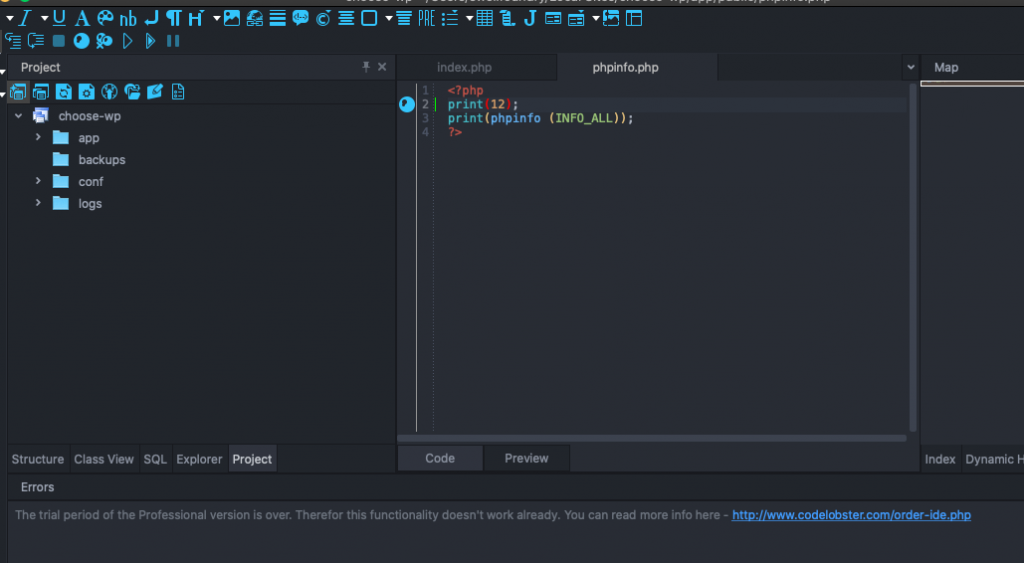 In the left hand panel you can toggle between class view, a feature that I really liked, it would save me time having to go to WordPress.org and look up a class. I also liked the html elements panel that allowed me to easily populate the page with a number of html tags such as lists, anchor links etc.

Clicking on the settings button bought up the properties panel, similar to the config settings I am used to for VSCode so it was nice to have that element of familiarity.

I did really like the fact that they have a built in WordPress extension, this helped to bring CodeLobster in line with some of my most used features on VSCode http://www.codelobster.com/wordpress.html.

I should mention whilst I and this site are biased towards WordPress CodeLobster has support for all popular frameworks: Drupal, Joomla, Magento, Twig, JQuery, AngularJS, Bootstrap, Laravel, MeteorJS, Phalcon, CodeIgniter, CakePHP, Symfony, and Yii

Overall whilst I won’t be switching from Visual Studio Code I do think that Code Lobster is an IDE that is worth taking a look at if you’re looking for a custom layout with the ability to easily add in html elements. Also some people may prefer to use an IDE that is not owned by one of the tech giants.

Editorial Staff at WP Warfare is a team of experienced WordPress users and experts managed by Nick Braithwaite. If you would like to join the team or share your WordPress experience by publishing your content on our site follow the guidelines here.